Making frequent changes to cloud applications running in production is the de-facto standard. To minimize errors, engineers use CI/CD automation, techniques like code reviews, green-blue deployments and others.

But what happens when a production PostgreSQL database, some SSH nodes, or a certain Kubernetes cluster needs troubleshooting? Unfortunately, quite often an engineer will just access those resources using a shared credential, without a formalized approval process, increasing possibility for human error or compromising security. Larger companies tend to take a more conservative approach and employ excessive bureaucracy, slowing everyone and everything down.

But what if an engineer could create a "git pull request" requesting temporary access to critical production infrastructure? Then her peers would review and approve such requests, granting her temporary access, with solid security and compliance guarantees.

In this blog post, we’ll explain how this can be done.

Access requests are important because they allow us to implement the principle of least privilege without slowing down the engineering team.

In practice, this means that root-type accounts are no longer needed. Think of access requests as a one-time sudo which needs to be approved by the rest of the team.

Obviously, for access requests to work well, the process of requesting and approving access must be quick and painless. We will show how to quickly implement Access Requests using Teleport, an identity-aware access proxy with support for various access protocols, including SSH, Kubernetes, PostgreSQL, MySQL, HTTPs, etc. Teleport is a simple UNIX daemon available as an open source download, hosted cloud offering, or enterprise solution.

Here's how it looks in practice when accessing an important box via SSH, for example:

Now Alice is waiting for her request to be approved. Meanwhile, her team receives a notification in Slack: 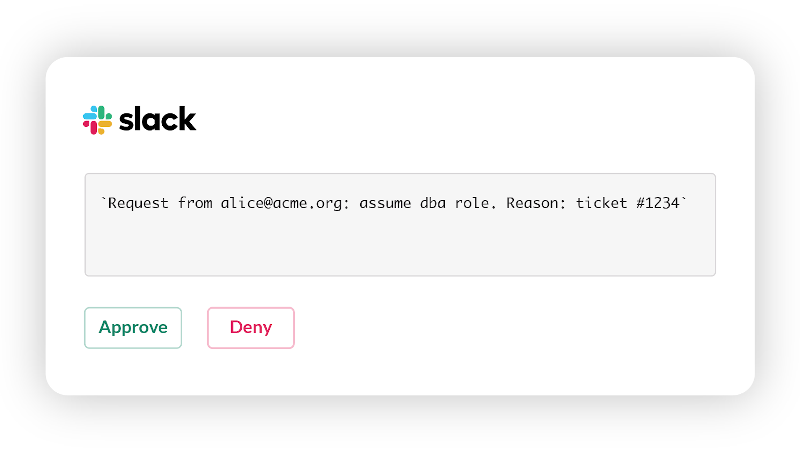 It is possible to configure access requests to be approved by more than one team member. In the example above, the security team members can approve or deny Alice's request using Slack as shown above, but Mattermost, Jira and PagerDuty are also supported.

Moreover, it is possible to customize the approval process via code. You can build integrations into your own ChatOps tool or even implement a fully automatic approval based on arbitrary business logic.

Access request approvals and denials are logged for future audit into Teleport's audit log. Teleport also records all user actions during the session, which could be replayed later in a YouTube-like UI.

At any given time, it is possible to see all outstanding access requests:

Access Requests in Teleport can be used when engineers need to access mission-critical computing resources such as:

Access requests can be used in the command line as shown above, or via a web UI. Access requests elegantly address the contradiction between developer productivity, security and compliance. In everyday use, they indeed feel very similar to git pull requests — but for infrastructure access.

To see access requests in action, check out the 3-minute demo video:

Access requests are available to users on an Enterprise plan. The quickest way to try them out is to: