Microservices, Containers and Kubernetes in 10 minutes

What is a Microservice?

What is a microservice? Should you be using microservices? How are microservices related to containers and Kubernetes? If these things keep coming up in your day-to-day and you need an overview in 10 minutes, this blog post is for you.

Fundamentally, a microservice is just a computer program which runs on a server or a virtual computing instance and responds to network requests.

How is this different from a typical Rails/Django/Node.js application? It is not different at all. In fact, you may discover that you already have a dozen of microservices deployed at your organization. There are not any new magical technologies that qualify your application to be called a microservice. A microservice is not defined by how it is built but by how it fits into the broader system or solution.

So what makes a service a microservice? Generally, microservices have a more narrow scope and focus on doing smaller tasks well. Let's explore further by looking at an example.

Let's examine the system which serves you this product page on Amazon. It contains several blocks of information, probably retrieved from different databases:

If you were to quickly write the code which serves this listing, the simple approach would look something like this: 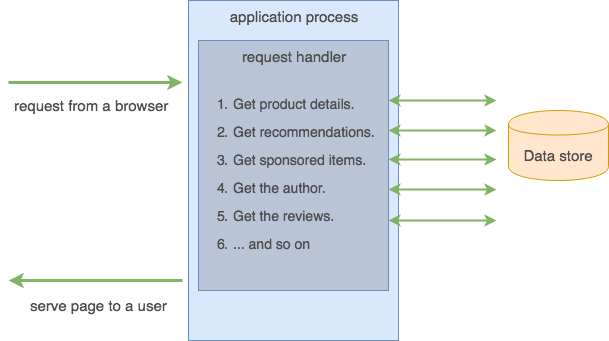 When a user's request comes from a browser, it will be served by a web application (a Linux or Windows process). Usually, the application code fragment which gets invoked is called a request handler. The logic inside of the handler will sequentially make several calls to databases, fetch the required information needed to render a page and stitch it together and render a web page to be returned to the user. Simple, right? In fact, many of Ruby on Rails books feature tutorials and examples that look like this. So, why complicate things, you may ask?

Imagine what happens as the application grows and more and more engineers become involved. The recommendation engine alone in the example above is maintained by a small army of programmers and data scientists. There are dozens of different teams who are responsible for some component of rendering that page. Each of those teams usually wants the freedom to:

As you can imagine, having the teams agree on everything to ship newer versions of the web store application will become more difficult over time.

The solution is to split up the components into smaller, separate services (aka, microservices).

The application process becomes smaller and dumber. It's basically a proxy which simply breaks down the incoming page request into several specialized requests and forwards them to corresponding microservices, who are now their own processes and are running elsewhere. The "application microservice" is basically an aggregator of the data returned by specialized services. You may even get rid of it entirely and offload that job to a user's device, having this code run in a browser as a single-page JavaScript app.

What is a Container?

Technically speaking, a container is just a process spawned from an executable file, running on a Linux machine, which has some restrictions applied to it, for example:

Historically, modern operating systems have always imposed restrictions on processes, for example every Linux process runs with privileges of a system user, but the containerization technology has introduced more possible restrictions and made them more flexible.

Basically, any Linux executable can be restricted, i.e. can be "containerized".

When one says "container" most of the time they are not referring to just a Linux process, they are also referring to how the executable is packaged and stored.

Tools like Docker allows developers to take their executable, and its dependencies, plus any other files they want, and package them all together into a single file. This technology is not too different from an archive like a tarball. Docker also, among other things, allows to include some additional instructions and configuration for running this packaged executable. And oftentimes these files, commonly known as "container images" are also called containers.

But for the sake of simplicity, just remember:

Container images are self-sufficient. They will run on any Linux machines, therefore containerization makes it much easier to copy (deploy) code from a developer's machine to any environment.

What is the difference between Microservices and Containers?

We just learned that a container is just a method of packaging, deploying and running a Linux program/process. You could have one giant monolithic application as a container and you could have a swarm of microservices that do not user containers, at all.

They are related, but do not require each other. You can have a monolith deployed as a container, or you can have an unrestricted, non-containerized microservice.

When to use Microservices?

The idea behind microservices is not new. For decades, software architects have been at work trying to decouple monolithic applications into reusable components.

The benefits of microservices are numerous and include:

Another win of adopting microservices is the ability to pick the best tool for the job. Some parts of your application can benefit from the speed of C++ while others can benefit from increased productivity of higher level languages such as Python or JavaScript.

The drawbacks of microservices include:

If an application and development team is small enough and the workload isn't challenging, there is usually no need to throw additional engineering resources into solving problems you do not have yet and use microservices. However, if you are starting to see the benefits of microservices outweigh the disadvantages, here are some specific design considerations:

What does Kubernetes have to do with Microservices?

Kubernetes is too complex to describe in detail here, but it deserves an overview since many people bring it up in conversations about microservices.

Strictly speaking, the primary benefit of Kubernetes (aka, K8s) is to increase infrastructure utilization through the efficient sharing of computing resources across multiple processes. Kubernetes is the master of dynamically allocating computing resources to fill the demand. This allows organizations to avoid paying for computing resources they are not using. However, there are side benefits of K8s that make the transition to microservices much easier.

As you break down your monolithic application into separate, loosely-coupled microservices, your teams will gain more autonomy and freedom. However, they still have to closely cooperate when interacting with the infrastructure the microservices must run on.

Kubernetes solves these problems quite elegantly and provides a common framework to describe, inspect and reason about infrastructure resource sharing and utilization. That's why adopting Kubernetes as part of your microservice re-architecture is a good idea.

Kubernetes, however, is a complex technology to learn and it's even harder to manage. You should take advantage of a hosted Kubernetes service provided by your cloud provider if you can. However, this is not always viable for companies who need to run their own Kubernetes clusters across multiple cloud providers and enterprise data centers.

For such use cases, we recommend trying out Gravity, the open source Kubernetes packaging solution, which removes the need for Kubernetes administration. Gravity works by creating Kubernetes clusters from a single image file or "Kubernetes appliances" and can be downloaded, moved, created and destroyed by the hundreds, making it possible to treat Kubernetes clusters like cattle, not pets. While Gravity is useful when using Kubernetes in a single environment, it is designed to give you a huge advantage when managing cloud-native applications in a multi-cloud world.

Here at Teleport we're taking these technologies even further. Our open-source Gravity Project allows developers to package an entire production environment (i.e. all microservices and containers in it) into a single deployable file which we call a "cluster image". This about Gravity as "Docker for entire Environments". This way modern, complex, cloud-native applications can be easily moved around and deployed into remote, restricted or regulated environments, think "someone else's cloud".