Teleport has supported multi-factor authentication (MFA) for a while now, via Authenticator Apps (TOTP) and Hardware Tokens (U2F) such as YubiKeys. But this support was pretty limited: you could only choose one MFA protocol and users could only register one device. If a user lost their device, they would be locked out and need an account reset by the administrator.

So, for Teleport 6.0, we’ve reimplemented the MFA support to make it more flexible. You can now enable both TOTP and U2F, and each user can have as many devices registered as they please. If you lose your U2F key but still have a TOTP app registered, you can log back in and replace your lost U2F key. No need to nag the cluster admin.

While working on this, I had the pleasure of learning about this exciting world of hardware MFA devices, like U2F keys. OK, it’s not really that exciting, but I’d like to share some things I learned along the way. Hopefully, this will save some poor soul out there some time.

Universal 2nd Factor (U2F) is an open standard for a 2nd authentication factor (duh) using small USB or NFC devices. It verifies two things during authentication: that the user has access to the physical device (which was previously registered), and that the user is actively performing the authentication (i.e. tapping the U2F device). Server-side, U2F is supported in many popular web services. Client-side, most major browsers support it too. There’s also some non-web software that supports U2F, like OpenSSH.

How does U2F work?

U2F involves 3 parties: the U2F device itself, a client (e.g. web browser) and a server (aka “relying party”). The user controls the U2F device and the client. The server wants to authenticate this user. 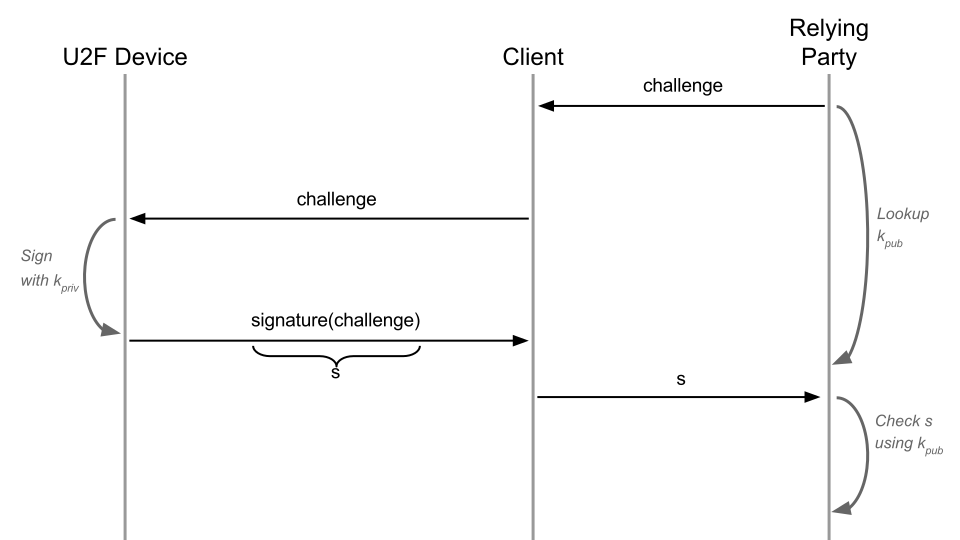 U2F is a classic challenge-response protocol. The U2F device holds an asymmetric key pair and signs a “challenge” (random byte blob) sent by the server during authentication. Before actually signing, the U2F device blinks and waits for the user to tap it. This proves that the user is present and is actively authenticating. Yubico has a great explanation of this protocol, with all its additional protections.

When you read any resources about U2F, you’ll end up swamped by other related acronyms. Here are some, and how they relate to U2F:

FIDO: Fast IDentity Online (Alliance) is a group of corporations trying to replace passwords. They do this by designing better authentication standards. This design-by-committee approach shockingly ended up creating a soup of standards and acronyms. In their 8 years of existence, they managed to create the first generation of standards (UAF and U2F) and replace it with the second generation (FIDO 2, WebAuthn and CTAP 2). Snarky remarks aside, they are doing valuable standardization work with rapid real-world adoption.

UAF: Universal Authentication Framework is essentially U2F with extra bells and whistles. I honestly don’t know why it exists or whether anyone uses it. Since it’s not compatible with U2F and since U2F is simpler, everyone just implements U2F.

WebAuthn: Part of U2F was the JS API to be implemented by browsers. For FIDO 2, the Alliance decided to pull out the JS API into a separate standard so that webapp devs had fewer specs to read. They also realized that acronyms are not very marketable to non-tech people, and so WebAuthn was born.

CTAP: Client to Authenticator Protocol is the other half of the FIDO 2 standard. It describes how browsers are supposed to talk to actual FIDO 2 devices when implementing their JS APIs. Strangely, CTAP covers both U2F and WebAuthn-compatible devices. CTAP1 is for U2F, CTAP2 is for WebAuthn. Why did they even include U2F here? Probably to nudge hardware vendors to implement both for transition, or because it was a different committee from WebAuthn.

You’ll notice many mentions of web browsers above. Indeed, all FIDO standards are web-centric and aren’t designed with any other client software in mind. But this doesn’t stop non-browser software authors from using the standard, usually with some kludges.

Can U2F Store My private Keys?

Since the U2F device creates and stores asymmetric key pairs, and is able to sign arbitrary “challenges”, can I use it as a general-purpose hardware key store?

Mostly, no. The U2F device doesn’t just sign any data you give it. It adds more information to it before signing, like the app ID (e.g. a website URL to prevent phishing) and a monotonic counter (to prevent replay attacks). With this unwelcome data added to the challenge, you can’t perform a TLS handshake or sign an X.509 certificate. Also, browsers don’t expose the raw U2F device messages; they are abstracted via a JS API which limits your options.

Curiously, OpenSSH added special handling for U2F signatures to the SSH protocol to allow using U2F devices for SSH private keys. Unfortunately, we don’t have the freedom to expand other standard protocols the same way.

What Else Is Out There?

There are many other hardware cryptography device types and protocols out there:

TPMs and HSMs are designed for different usage scenarios than U2F. PIV is pretty similar to U2F, but much less constrained in how it’s used. For example, PIV can easily be used for SSH without any protocol changes. Crypto wallets don’t seem portable or standardized (beyond sometimes implementing FIDO protocols).

What I Wish Was Out There?

If you step away and squint, all of the above hardware device types are essentially the same — they are tamper-resistant hardware key stores. The unifying property is that they never let private keys leave the device and expose signing and encryption operations to the software.

What I’d really like as a developer (and user) is a simple, cheap, universal hardware key store as a USB stick. It needs to store multiple key pairs and expose raw signing/encryption operations (ideally not via a PKCS#11 module) and that’s it.

U2F is close, but doesn’t let you sign arbitrary data. It can’t be used in place of regular on-disk key pairs. Generally, FIDO standards push too much logic into hardware, when it could be handled in software instead. TPMs are soldered onto motherboards so they are not portable. Like U2F, they also don’t let you sign arbitrary data. HSMs come close, but they are too expensive (hundreds to tens of thousands of dollars) and focused on infrastructure use cases. PIV is the closest to what I want. But most PIV products are smartcards that require a separate reader dongle. There are some USB devices that support PIV (e.g. some YubiKeys and Nitrokeys), but they all require custom drivers (PKCS#11 modules) to be installed. There seems to be no standard protocol for talking to the device directly, like CTAP in the FIDO world. Also, the UX for PKCS#11 and client TLS certificates in browsers is pretty poor.

Using this dream device, you could build the rest of U2F/CTAP/TPM/HSM/PIV logic in software without losing much in terms of security.

Do you know of any hardware crypto standards that fit the above criteria? Let me know.

An opinionated list of resources to learn more about hardware MFA devices:

And if you’d like to try the U2F support in Teleport, read our user guide.