Do We Still Need a Bastion?

There is a growing discussion among network engineers, DevOps teams, and security professionals about the security benefits of bastions. Many assume that they are the “old way” of network access and have little relevance in the modern cloud native stack. These speculations are not irrelevant as in recent years, the corporate IT network perimeter as we knew it is diminishing, and the concept has been shifted to data, identity, and compute perimeter. Software-defined networking solutions have overtaken hardware firewall boxes, and the requirement of managing bare metal servers has shifted to container deployed or even serverless applications. Where do bastions fit in these scenarios? Do we even need one?

A short primer on bastions

By definition, bastions are a fortified checkpoint to counter or contain a threat. The concept of bastions can be applied to the real life fortification of a place or a building or a computer network.

The term “bastion hosts” was initially used by Marcus J. Ranum in his 1993 article on the topic “Thinking About Firewalls,” where he discusses that a bastion host is a security-hardened server, which should be the strongest and the last checkpoint in a network before the access is allowed to the internal network or internally hosted application. Further, bastion host can itself be used as a firewall (a bridge to connect to internal network servers) or can host application services on top of its security-hardened system.

Although bastion hosts themselves provide good enough security to protect direct network access to servers and applications, they have the following shortcomings:

Bastions are not only for SSH!

Before we conclude the primer on bastions, it is important to mention that Bastions are not only for SSH. Most of the time, people relate to bastion host as an SSH jump server, which is correct but does not cover all use cases. While a Linux server configured with OpenSSH (setup as SSH Jump server) is a typical example of a bastion host, a bastion can sit in front of any protocol. For example, you can use a bastion for database access, RDP access, internal web application access. In fact, any internal endpoints which should not accept direct network access should be placed behind a bastion for extra security.

When you want to allow remote access to internal servers and applications securely, adding bastions in front offers security to a great extent. Below are a few quick security wins when using a bastion.

Few hardened access points are better than the “allowAll” setup. Configuring networks such that bastions are the only way inside helps reduce the attack surface.

When a remotely exploitable vulnerability is discovered, it becomes challenging to contain threats without affective server uptime. Using network firewalls and bastions together helps significantly to contain such threats. You can configure bastions such that internal teams (security, DevOps) can access the affected server while all other access is blocked.

Even if the application behind supports strong authentication and authorization schemes, adding a security-hardened bastion in front ensures defense in depth. You’ll have one additional endpoint to block or contain threats.

Below, we will try to address common misconceptions related to bastions with reference to the capabilities of modern bastion services.

Bastion does not fit in immutable infrastructure and NoOps.

Immutable infrastructure is a fantastic concept. Many immutable infrastructure advocates suggest disabling SSH altogether such that troubleshooting tasks should be performed at the observation layer (logs, telemetry), and completely new infrastructure should be provisioned for patches and updates. Although the pros and cons of this method are out of topic for this article, it is essential to note that such an environment is not an easy task to manage itself. For emergencies or hotfixes, the ability to quickly access the server, debug and fix wins most of the time, so many teams still manage SSH access for break-glass access. And for managing secure SSH access, nothing beats a security-hardened bastion!

Further, recall that bastions are not only for SSH. So even if your infrastructure is fully immutable, you will need to protect access to observability dashboards, and a bastion’s services are recommended ways to secure access.

Many professionals claim that using bastions will make you think access to internal servers is foolproof, but hackers will find a different path to your network, bypassing the Bastion. It’s true; for when an attacker is determined, they will find a way in, one way or another. But security is about defense in depth, and having good security controls in place keeps 99% of script kiddies and bots at bay.

Use a firewall instead of a bastion.

In a proper network configuration, you should use both a firewall and a bastion. Although firewalls have made much progress in packet inspections and understanding HTTP protocols, it is still far from understanding other protocols such as database wire protocols or technology-specific nuances such as Kube API. Thus, you will still need a bastion host and run a proxy service or a modern bastion service to control access at the protocol level.

We use a VPN server.

When you implement a VPN for remote access, the VPN server acts as a bastion host for your network. In this case, you are only trading between a bastion server that allows secure network tunneling (a VPN server) vs. a bastion service that supports encrypted network (TLS) with better AuthN, AuthZ, and protocol-level awareness. Further, bastion services like Teleport offer a reverse tunneling feature to manage secure access to services behind a firewall and NAT without the need to open servers to a public routable interface.

Bastion is an “additional server” to maintain.

The trade-off between “extra server” to maintain vs. security benefits it provides are entirely worth it. Further, modern bastions are offered as a service that can be provisioned on an existing Kubernetes cluster or as an ephemeral service, meaning no need to manually set up and maintain a server.

Bastion has no place in a perimeter-less zero-trust world.

Funny how marketers have come to this conclusion. We mentioned earlier that the core technology of BeyondCorp (one of the first practical implementations and an industry-leading zero trust access solution by Google), which is an Identity-Aware Access Proxy (IAP), is by definition a bastion service. Also, see Zero Trust Network Access (ZTNA) which mentions a “trust broker that verifies the identity, context, and policy adherence of the specified participants before allowing access and prohibits lateral movement elsewhere in the network while hiding application assets from public visibility”. The trust broker, in this case, is by nature a bastion service. 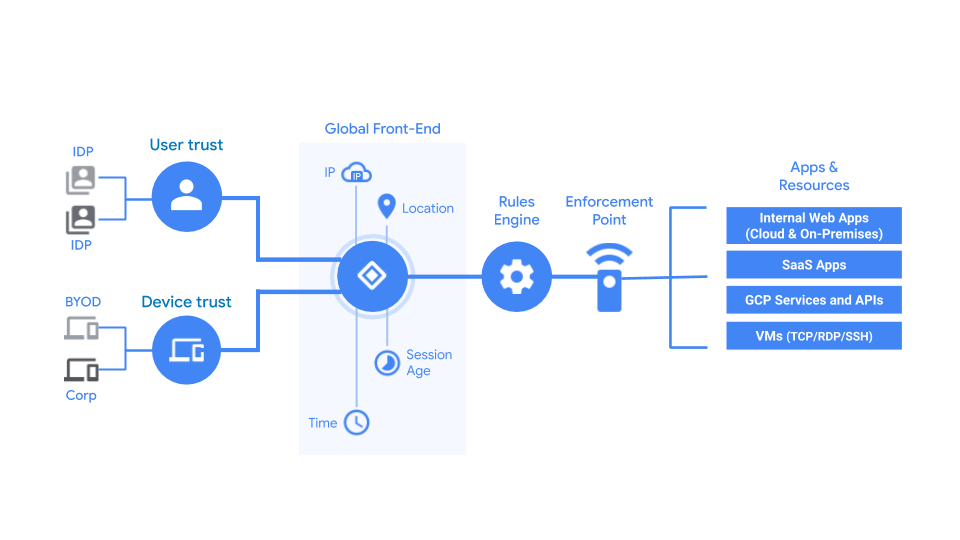 Fig: BeyondCorp architecture reference from Google. In the above case, the global front-end acts as a bastion service.

If all of your requirements for remote access can be achieved using these services, then using a bastion may not be a use case for your team. But since these services are platform-specific, it might not be relevant if you self-manage your infrastructure outside public clouds or have multi-cloud strategies.

Modern applications already support strong AuthN and AuthZ. So adding a bastion in front is just a bloat in the network.

It’s quite the opposite! Along with defense in depth, bastion also enables centralized logging, auditing and helps you unify AuthN and AuthZ events across your infrastructure. It also becomes much easier to maintain and enforce fine-grained access control rules in a small pool of bastions rather than individual applications. So rather than bloat, we believe bastion-based network design helps manage large infrastructure with proper security controls.

Our small dev team or dev-staging environment does not require complications of the bastion.

“Attack them where they are unprepared, appear where you are not expected” - Sun Tzu Art of war.

Exploiting a development (or staging) environment and pivoting to the production environment is one of the favorite attack methods for hackers. Many data breaches start by exploiting an easy target, dev, and staging environment often neglected for security! In addition, production data is often pulled into dev servers (insecure practice), so skipping security practices in development environments does not make any sense.

When would you genuinely not require to use a bastion?

There are some situations where using bastions may not be relevant.

Although the dynamics of managing and operating cloud infrastructures have changed, bastions have also evolved a long way featuring capabilities such as user identity-aware and connection protocol-aware access proxy. These features are core components of the zero trust access paradigm. In addition to security benefits such as meeting compliance requirements and implementing defense in depths, modern bastion services are easy to deploy and adapt to DevOps culture. Providing ease of management without compromising on security and compliance, bastions are still the best and safest solutions to manage secure access to cloud infrastructures.

Get the latest product updates and engineering blog posts

In the cloud, self-hosted, or open source

This site uses cookies to improve service. By using this site, you agree to our use of cookies. More info.