It is likely that at some point in the span of your software engineering career, you will run into an issue that requires poring over audit logs to figure out what went wrong and who did it. This could be to troubleshoot a variety of issues ranging from an unauthorized change that a consultant or vendor made, to bad actors that have gained access to your system. During such times, it would be helpful to be able to play back exactly what happened — like using an arcane spell to recreate the situation or making remote collaboration as easy as casting Rary’s Telepathic Bond. At Teleport, in the absence of magic, we offer Teleport — our solution to privileged access management for cloud-native infrastructure. In this post, we will explore how two of Teleport’s features, session recording and session sharing, make these magical solutions a reality for developers.

Imagine that you are in a cursed terminal session - everything is going wrong, you can’t figure out where the issue even began, and all of your coworkers who could sit down with you to help are out of the office. How do you go about fixing the problem? 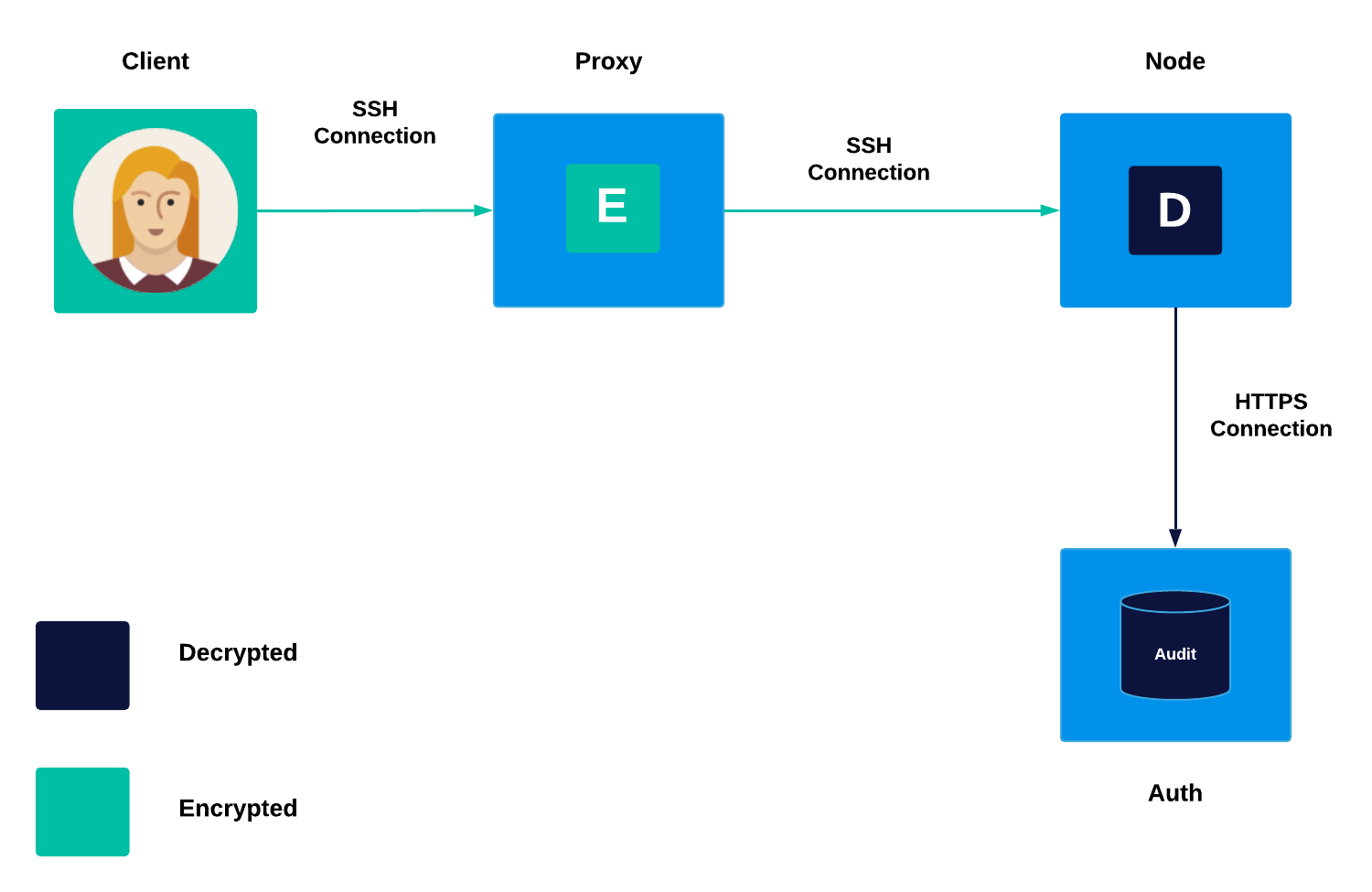 By default, Teleport records all SSH terminal sessions by submitting SSH session traffic to the auth server for storage and later replay, allowing users and companies to have full audibility. The recorded sessions are streams of bytes that the terminal interprets from the user output and can recreate.

Thinking back to the scenario of a cursed terminal session, even sorting through audit logs may not help you figure out exactly what went wrong as you can easily become overwhelmed by the amount of information to sort through and the time it takes to do so by hand. This is where it becomes indispensable to have full Teleport session recordings that can be replayed via tsh play command or in a web browser. Being able to replay a video of the session in question allows the developer to easily pinpoint the actions being taken in a terminal session and the identity of the user who made the issue and eliminates the need to pull and review all audit logs one by one.

Teleport recently rolled out an eBPF based enhanced SSH session recording solution to address the above concerns. Check out our recent blog post for more information about this new enhancement!

Remote Collaboration via Terminal Made Simple 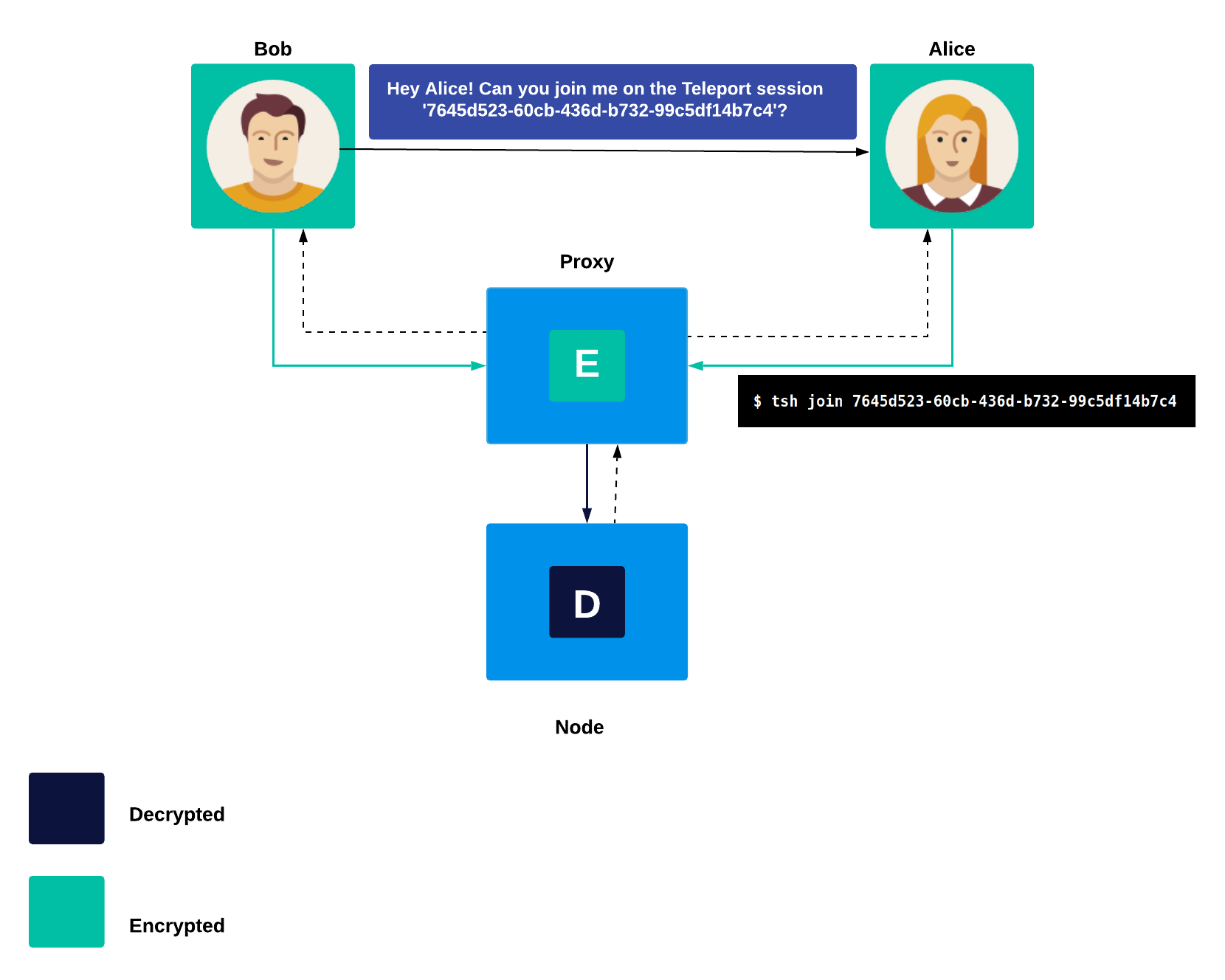 Teleport session sharing allows for teams to work across physical barriers. In the case of a cursed terminal session, a befuddled engineer can provide their out of office coworker a link to join an SSH session in order to collaborate easily and securely. Traditionally, for team members to troubleshoot a problem on a remote server, you would need to:

Teleport’s session sharing removes the need for a terminal multiplexer and makes the experience seamless with normal terminal activity.

Behind the scenes, Teleport’s session sharing feature is sending the output of the same pseudo-terminal (PTY) to multiple users that are joined on the same node’s session ID. An important warning is that session sharing is functionally the same as giving your keyboard virtually to anyone who knows the session URL as it allows the user joining the session to send writing data to the session for execution. Don’t give it to someone that you don’t want to be able to have the same access and make the same changes that you can.

When magical items or spells aren’t available to save you from a cursed terminal session or hunting down a root cause, Teleport is! Teleport can save engineers’ time and make collaboration in the terminal simple through the session sharing and recording features. If you would like to learn more about the real life magic of Teleport check out our documentation and try out the open source version!

PTY (pseudo-terminal) is a software implementation that appears to the attached program like a terminal. Instead of communicating directly with a “real” terminal, it transfers the input and output to another program.

The four-eyes principle is a control mechanism which requires the approval of at least two people (or four eyes).

SSH or Secure Shell protocol is a network protocol that secures communication between a client and a remote server.

A node is a "server", "host" or "computer". Users can create shell sessions to access nodes remotely.

Speciality configurations can allow SSH recording on a Teleport proxy.

Tsh is a Teleport client tool used by the end users that is similar in nature to an OpenSSH client.

eBPF (extended Berkeley Packet Filter) is an in-kernel virtual machine that can be used for non-networking purposes.