Although the typical use case of SSH is to access a remote server securely, you can also transfer files, forward local and remote ports, mount remote directories, redirect GUI, or even proxy arbitrary traffic (need I say SSH is awesome?). And this is just a small set of what's possible with SSH.

In this post, I'll cover different tunneling features as supported by OpenSSH, which helps achieve security use cases such as remote web service access without exposing ports on the internet, accessing servers behind NAT, exposing local ports to the internet. OpenSSH is the most widely used open-source SSH server. It comes pre-installed by default with the vast majority of Linux distributions.

If you are looking for a modern open-source alternative to OpenSSH that is optimized for elastic multi-cloud environments and supports other access protocols in addition to SSH, make sure to check out Teleport.

What is SSH tunneling?

SSH tunneling is a method to transport additional data streams within an existing SSH session. SSH tunneling helps achieve security use cases such as remote web service access without exposing port on the internet, accessing server behind NAT, exposing local port to the internet.

How does the SSH tunnel work?

When you connect to a server using SSH, you get a server's shell. This is the default behavior of an SSH connection. Under the hood, your SSH client creates an encrypted session between your SSH client and the SSH server. But the data transported within the SSH session can be of any type. For example, during shell access, the data transmitted are binary streams detailing dimensions of pseudo-terminal and ASCII characters to run commands on the remote shell. However, during SSH port forwarding, the data transmitted can be a binary stream of protocol tunneled over SSH (e.g. SQL over SSH).

When local port forwarding is used, OpenSSH creates a separate tunnel inside the SSH connection that forwards network traffic from the local port to the remote server's port. In OpenSSH, this tunneling feature can be used by supplying -L flag. Internally, SSH allocates a socket listener on the client on the given port. When a connection is made to this port, the connection is forwarded over the existing SSH channel over to the remote server's port.

Local port forwarding is one of the ways of securing an insecure protocol or making a remote service appear local.

When to use local port forwarding?

If a service running at a remote server does not natively support an encrypted transport mechanism, in that case, local port forwarding can be used to connect to that service by tunneling inside an encrypted SSH session.

For security reasons, it is good to bind services only to the local interface (as opposed to listening on a public interface). The flip side to this is how users would access the service from an external network. You can use local port forwarding to access the service that is listening on the remote localhost. In this way, connections on the local machine made to the forwarded port will, in effect, be connecting to the remote machine.

Further, there are no restrictions on the number of port forwarding you want to enable. For example, below SSH forwards two local ports, 3338 and 3339, to remote ports 3338 and 3339.

Remote port forwarding can be achieved in OpenSSH by using -R flag. Internally, SSH allocates a socket listener on the remote server on the given port. When a connection is made to this port, the connection is forwarded over the existing SSH channel over to the local client's port.

When to use remote port forwarding?

Consider the scenario below. The client runs a web server on port 3000 but cannot expose this web server to the public internet as the client machine is behind NAT. The remote server, on the other hand, can be reachable via the internet. The client can SSH into this remote server. In this situation, how can the client expose the webserver on port 3000 to the internet? Via reverse SSH tunnel! 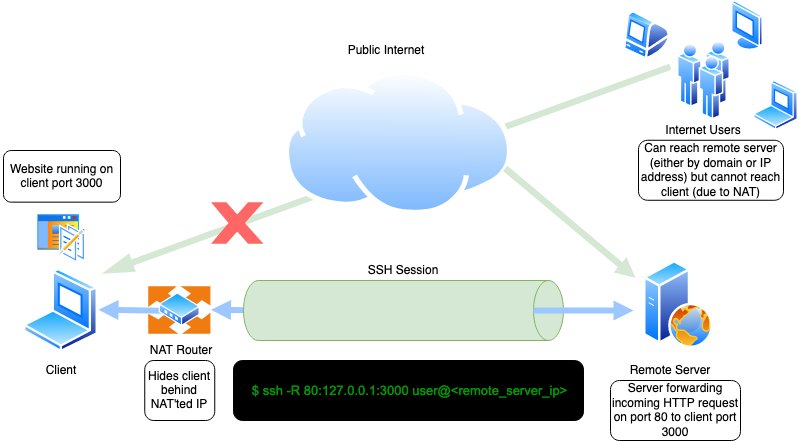 By default, the remote port forwarding tunnel will bind to the localhost of the remote server. To enable it to listen on the public interface (for a scenario like above), set the SSH configuration GatewayPorts yes in sshd_config.

Both local and remote port forwarding require defining a local and remote port. What if the ports are unknown beforehand or if you want to relay traffic to an arbitrary destination? Also known as dynamic tunneling, or SSH SOCKS5 proxy, dynamic port forwarding allows you to specify a connect port that will forward every incoming traffic to the remote server dynamically.

Dynamic port forwarding turns your SSH client into a SOCKS5 proxy server. SOCKS is an old but widely used protocol for programs to request outbound connections through a proxy server.

When to use dynamic port forwarding?

By tunneling network traffic inside SSH, it is possible to access services such as HTTP web pages that may be blocked by your ISP or organization. SOCKS5 proxy can proxy any type of traffic and any type of protocol. This means you can tunnel HTTP inside SSH using SOCKS5. 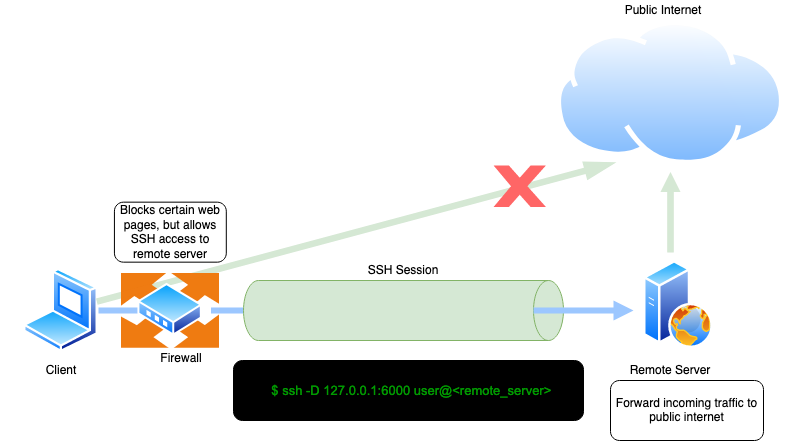 Consider the case above. The client cannot access certain web pages due to content filtering implemented in front by the firewall. But the client can connect to the remote server (via SSH), which has unrestricted access to the internet. In this case, the client can initiate ssh connection by enabling dynamic port forwarding, thus creating a SOCKS5 proxy; the client can point web browser to proxy listening on local port 6000 and access restricted web content.

SSH supports tunnel device forwarding (also known as TUN/TAP). TUN/TAP are virtual network interfaces that can be used to create a tunnel between two servers. This setup is a poor man's VPN. For a fully working SSH-forwarded TUN/TAP tunnel, you will first need to add a tun device and configure routing between two servers. The format for using SSH TUN is -w local_tun[:remote_tun]. Refer to this guide for a complete setup. There's also a script available in this blog post if you want to try tunneling in your server.

So far, we've discussed how SSH supports tunneling inside existing SSH sessions. But SSH itself can be tunneled over other protocols such as SOCKS. TOR is a popular anonymity software that supports tunneling any protocol over its SOCKS5 proxy.

SSH already provides a secure way of communicating via encrypted channels. If you want additional anonymity (conceal origin of SSH session), you can use TOR to relay SSH connection. This can be done by using torsocks as:

Or using netcat as:

So far, we have covered the advantages of SSH tunneling and how it makes it easy to connect to remote services, which otherwise would not be possible due to network configurations and restrictions. But this power of SSH tunneling is also often misused by malicious users. Hiding malicious traffic within an SSH tunnel is a common classic way to go undetected inside a network. For example, read this post where android malware used SSH tunnel to access corporate network, this report which states Fox Kitten campaign using SSH tunnel, or this article describing misuse of SSH tunnels to send spam.

Detecting such activities is tough since SSH communications are encrypted, and you would not know what kind of data is transported underneath. If you are a network or security administrator, a continuous full traffic analysis within your network is a must which might give you clues such as types of SSH access performed, e.g., SSH file transfer, SSH shell access, or SSH tunnel. If the patterns do not match the work stuff that SSH requires to be used within your network, it might be a good lead to start an investigation.

Although the default behavior of an SSH server is to return a remote server's shell over an encrypted channel, SSH supports sending and receiving binary data over SSH. Transporting arbitrary data streams over SSH sessions is also known as SSH tunneling. OpenSSH, a popular open-source SSH server, supports three types of tunneling features- local port forwarding, remote port forwarding, and dynamic port forwarding. These tunneling features help achieve security use cases such as remote web service access without exposing port 443 on the internet, accessing server behind NAT, exposing local port to the internet, or even create a point-to-point VPN like encrypted tunnel.

SSH tunneling techniques are also frequently used by adversaries to hide malicious network traffics. As a network or security administrator, if your team or developers use an SSH tunnel, it is important to monitor traffic patterns to continuously detect anomalies in regular patterns. This can be done by first capturing packets with packet sniffing tools such as tcpdump and Wireshark and analyzing the traffic.

Next - Try Teleport. Teleport is a modern SSH server with features optimized for elastic multi-cloud environments and supports other access protocols in addition to SSH. If your servers are split across different networks/clouds, Teleport Node Tunneling lets you manage secure remote access without the need to open these servers to the public network.